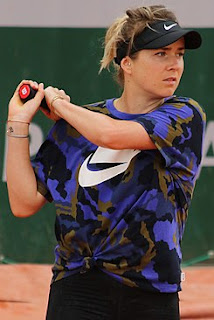 With a score of 6-2 and 6-1, the match also ended the speculation of whether Sivolina would play the game to protest of the invasion of Ukraine by Russia.

Svitolina had threatened not to take part in the game days ago, but her position changed when the Women's Tennis Association or WTA, according to an anonymous Ukranian media source, agreed to meet her demands. A statement by Elina was cited in espn.com.mx yesterday.

"The people in charge of relaying the match, along with those in the stadium, have confirmed that all flags and written material praising Russia will be eliminated during tomorrow´s game."

Elina Mukhailivina Svitolina was born in 1994 in Odesa, Ukraine, in 1994. In 2010, at only fifteen years old, she won the Roland Garros Junior tournament when she beat Tunisian player Ons Jabeur. Elina is the first woman from her Country to be among the top ten tennis players worldwide.

By tomasinchicago
Email ThisBlogThis!Share to TwitterShare to FacebookShare to Pinterest