Blame It On The Mexicans 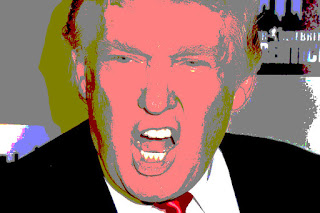 We all know that President Donald Trump ran his whole campaign by viciously attacking his neighbors, the Mexican people. On August 31st of last year, just hours after meeting with President Enrique Peña Nieto, who in the spirit of friendship had extended an invitation to both presidential candidates, Trump addressed a rally in Phoenix in his usual exhilarated style: "Are you ready? Are you ready? On day one, we will begin working, on an impenetrable, physical, tall, powerful, beautiful, southern border wall." Mister Trump sounded so excited, that his rampage sounded as if it had been crafted for a song, and as usual, his ardent supporters erupted in joy. After catching his breath, he went on with his attack: "We will use the best technology, including above and below ground sensors. That's for the tunnels. Remember that: Above and below. Above and below ground sensors."


During  his inauguration, Mister Trump said that "protection will lead to great prosperity and strength," but why did he have to conduct his electoral battle criminalizing Mexicans in such a mean-spirited way? And what could be the benefits of building a border wall in this era? During another rally last February, the then-candidate told his crowd: There is something going on that's really, really bad, alright? And we'd better get smart, and we'd better get tough, or we're not gonna have much of a country left. Okay? We're not going to have a country." What was Trump trying to do? Scare his supporters by depicting immigrants as a lower class of human?

Yes, there are millions of undocumented Mexicans, and Trump found this population to be a perfect target to attack in order to get elected, as do many other Republican politicians, but they are not the real enemy of the United States according to experts. Mister Trump conducted a spiteful criminalization campaign by bringing people like Mary Ann Mendoza to his rallies. Mary Ann's son, Sergeant Brandon Mendoza, died in a car accident in Arizona involving an undocumented immigrant who had a criminal background and had returned to the country after being deported.

"My son's life was stolen at the hands of an illegal alien," Mendoza told the Republican National Convention while standing in front of an enormous sign that read "Make America Safe Again." "It is time that we have an administration that cares more about Americans than about illegals, she warned. "A vote for Hillary is putting all of our children's lives at risk. It is time for Donald Trump."

The fate of Sergeant Mendoza was a very tragic one, I agree. And so was the murder of 21-year-old Grant Ronnebeck, an employee of a QuikTrip store in Mesa who was killed by Apolinar Altamirano, another undocumented immigrant who suffered from mental disabilities and had a criminal background. But was it fair of Donald Trump to use these grieving people during his campaign?

The Truth about  the Criminalization by Donald Trump

"For more than a century, innumerable studies have confirmed two simple, yet powerful truths about the relationship between immigration and crime," researchers Walter Ewing, Daniel Martínez and Rubén Rumbaut wrote in the study "The Criminalization of Immigration in the United States" conducted by the American Immigration Council. The research found that roughly 3.3 percent of native-born males ages are imprisoned, but only 1.6 percent of immigrant males end up in the same situation. And "this disparity in incarceration rates has existed for decades, as evidenced by data from the 1980, 1990 and 2000 decennial census."

The study reveals that "immigrants are less likely to commit serious crimes, or be behind bars than the native-born," and also that "high rates of immigration are associated with lower rates of violent  and property crime. "This holds true for both legal immigrants and the unauthorized regardless of their country of origin, or level of education."

President Donald Trump kept saying during his presidential run that three million undocumented immigrants are criminals, but that is a despicable lie. Research by the Migration Policy Institute found that only around 300 thousand out of the estimated eleven million who live here have felony convictions, and that 390 thousand others are misdemeanants. So where did the President get his numbers? Maybe they are just some of his administration's "alternative facts."


Mexicans Have Always Been American

During his inaugural address, President Trump announced that: "From this day forward, a new vision will govern our land. From this moment on, it's going to be America first. America first! Every decision on trade, on taxes, on immigration, on foreign affairs, will be made to benefit American workers and American families." Well-said, Mister President! So when you say "Americans," you must be talking about the Mexicans too, right? Because America is not just the land between the Rio Grande and Canada. No, America extends from Canada all the way South to Patagonia.

There is no reason why citizens of the United States should fear immigrants more than they do their compatriots, and it was calumnious of the President to single out Mexicans as a threat to national security. As a matter of fact, this country has been Latin since the 1830's, as Joel Millman pointed in his book "The Other Americans." "Indeed," the author clarifies, "the United States went to war to become Latin, absorbing half of México before 1850." And "America became Asian later in the same century, bringing Hawaii (and for several decades, the Philippines) into its territory." And along with these land grabs, the Spanish language was imported as well.

The President's rallying cry during his campaign ("Build that wall, build that wall") was, in my opinion, an invitation to hate, and it has led to extreme polarization of this society based on falsehoods (or "alternative facts," as his administration likes to call their data). The persecution of criminal immigrants has been in full force for years, and to further attack the vulnerable is just plain evil. There is a reason why so many pro-immigration activists called President Barack Obama the "deporter-in-chief."

"Mr. Trump has pledged a greater focus on removal of unauthorized immigrants with criminal records," says the Migration Policy Institute. But "the immigration enforcement system has already been recalibrated in recent years to focus on this population." In 2015, 59 percent of removals were of convicted criminals. Below is a chart by the Institute with the percentage of criminal immigrants that have been sent back in recent years .

The Other Undocumented Immigrants


It is worth mentioning that almost half of the estimated eleven million undocumented immigrants are not of Mexican descent. Around 1.5 million are from Asia, 650 thousand came from South America, and 600 thousand were born in Europe. Below is a breakdown of this population compiled by the Pew Research Center.

Now President Trump has moved  to impose a ban on refugees from Iraq, Syria, Iran, Sudan, Libya, Somalia and Yemen, allegedly to "fight terrorism." But there is great hypocrisy, or many would say racism, in such decision. Mister Trump: Fifteen of the 9-11 attacks' hijackers were from Saudia Arabia, and entered the country illegally. Why not impose a ban on them? Why not go after such a backward regime as the Saudi, which rules a country where women are not even allowed to drive? Where is the fair logic in your attacks against immigrants? When have you seen a Mexican terrorist?

The border wall executive action by President Trump "unleashed a divisive attack on Latinos in Phoenix and around the country," said Mayor Greg Stanton. And he is not alone in his position. That is why 300 cities, including New York, Chicago and Los Angeles, have become sanctuary cities.

"You are safe in Chicago. You are secure in Chicago. And you are supported in Chicago. We will always support you," said Mayor Rahm Emanuel in a press conference aimed at reassuring immigrants. These elected officials appreciate and uphold the values of this country, "the land of the free". The actions of the President, on the other hand, are like fuel for the flames of terrorism, and they will likely hurt the country more than help it. This is a sad assessment, and I really hope that the Republicans change their reckless course.