The Catholic Church Leads the Push for Immigration Reform

While the nation remembered the September 11th attacks last Friday, here in Chicago at Holy Name Cathedral, downtown, forty Hispanic Catholic leaders were being given tiny bottles of holy water from the Rio Grande as part of a campaign to humanize the Mexico - United States border, a 2,000 mile corridor where thousands of people have given their lives in search of the American dream.


Speaking of the Syrian exodus and death in the Mediterranean Sea, Archbishop Blase Cupich  said that "this current crisis brings up a larger issue, one of peace and economic justice in every country around the world." Cupich remembered the Syrian toddler who washed up on the shores of Turkey and stirred the Internet worldwide,  and added that his picture "could've been taken in the seas of the Florida Keys, the Italian islands or the American Desert."


Yes, Donald Trump has been topping the headlines in the mainstream media with his attacks against Mexican immigrants, but these same outlets have also under-reported the efforts of activists and many migrants underway around the country. Non-Spanish media, for example, has largely failed to count the story of 100 women around the country who are preparing to march from York County's detention center in Pennsylvania to Washington D.C. These female activists are hoping to see Pope Francis,  and if they get their wish, they want to ask him to call for an immigration reform during his address to the United States Congress. Many of the marchers are undocumented women.

While the anti-immigrant rhetoric has been a highlight of many newscasts, support of everyday citizens for an immigration reform that could give a path to citizenship to 11 million undocumented people is at an all-time high in the country. The latest Gallup poll, conducted June 15-July 10, found 65 percent of adults okay with them staying if they meet certain requirements over time. Support has risen six percentage points since 2007. Eighty percent of Democrats support  a path to citizenship, while only 50% of Republicans feel the same way. 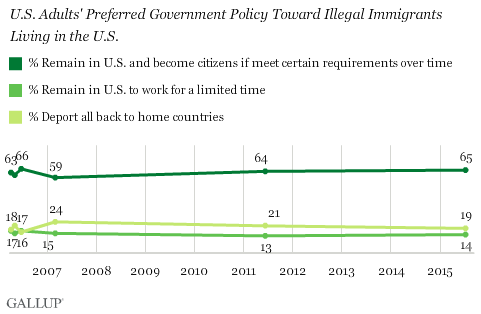 The treatment of immigrants here in the United States varies depending on the region where they reside, and state-sponsored discrimination is rampant in some places. Two unique cases are Arizona and Texas. In Arizona, on the one hand last May, the Board of Regents granted state-tuition rates to Dreamer immigrants, those who benefited by President Obama's immigration relief if they arrived during their infancy. On the other hand, the State Attorney General has sued to stop this same group of immigrants from getting a driver's license. In Texas, 30 families have sued the Department of Health for denying their children birth certificates.

Here in Chicago, thankfully, we are a sanctuary city for immigrants. State-tuition at the City Colleges is granted based on the length of your time living here, and the City Council is currently debating the creation of a municipal ID that those without legal residence could get to make their life easier. In march of 2006, by the way, an immigration rally downtown drew 100,000 people, and it ignited  demonstrations that brought millions of people to the streets around the country.

The pro-immigration movement, thanks to Donald Trump, has become stronger than ever. Ironically, with his extremist discourse, Trump has made immigration a central issue for the upcoming Presidential elections, and the Republican party is very worried. Without Hispanic support, they will not make it to the White House, and their current front runner's campaign is further alienating this section of the electorate.

On September 19th,  here at Daley Plaza, the Archdiocese of Chicago will hold a special mass that will focus on immigration. Expectations are high with the visit of Pope Francis. The head of the Catholic church might be the person needed to deliver the kick that Republicans in the House of Representatives need to approve comprehensive immigration bill passed by the Senate in 2013.

Enlace a la historia en español/Link to Spanish story.
By tomasinchicago
Email ThisBlogThis!Share to TwitterShare to FacebookShare to Pinterest