Barely Adventist: Donald Trump to Explain Himself at Universidad de Montemorelos in México 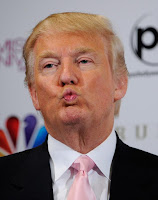 "In an attempt to brandish his foreign policy credentials and limit the damage from his comments about immigration from Mexico, Donald Trump has announced a tour of Mexico during which he will visit Universidad de Montemorelos, an Adventist university in the Northern Mexican state of Nuevo León," read the Friday note on Barely Adventist.


"In the spirit of Christian forgiveness, we have allowed Mr. Trump to address an audience in Montemorelos," said Claro Tratamos, a spokesperson for the school. "Although we in no way endorse his presidential bid, Mr. Trump's candidacy is of great interest to our International Relations and Business Studies departments."


Of course, many people have not realized that Barely Adventist is a satire magazine, and the news has spread in this little town, generating angry comments from some of its residents and migrants.

"If he goes there, kick his ass for being a racist and an evil person. Motherfucker, doesn't he understand that we are the ones who come here to work," read an angry immigrant's post on Facebook. "Fucking gringo, how can he generalize like that?"

"He'd better not try to come here, because we will kick him out, wrote one of the residents. "We don't want that type of people here."

"We will give him one chance and one chance only to explain his controversial position on Mexican/American relations as well as his even more disturbing hair," said Tratamos, ending the report.