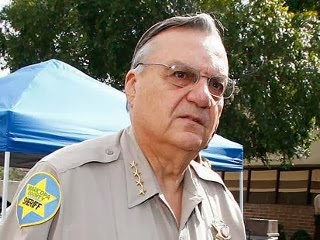 How do we know that Joe Arpaio, sheriff of Maricopa County, Ariz., is a racial profiler, an abuser of power who has subjected Latinos for years to unconstitutional arrests, detention and harassment?

We know, because a federal court says so — Judge G. Murray Snow of United States District Court in Phoenix, in a 142-page opinion released on Friday, excoriated the Maricopa Sheriff’s Office for violating the Fourth and 14th Amendment rights of Latinos by illegally using race as a factor in questioning people in neighborhood sweeps and traffic stops.


Judge Snow said that Arpaio and his 800 deputies must stop conducting criminal investigations of people whom they suspect — because of their skin color, accents, clothing or whatever other baseless reason — of having violated civil immigration laws. The sheriff won’t face arrest or fines; the civil lawsuit, Melendres v. Arpaio, brought by the American Civil Liberties Union and other groups on behalf of Latinos in Maricopa County, sought only to get the abuses acknowledged and stopped.

So we know because of a judge’s ruling.
But we also know that Sheriff Arpaio has singled out Latinos for unjustified abuse because the sheriff said so himself, as loudly and in as many ways as he could.

The sheriff acknowledged his lawlessness by stating, over and over, his intention to go after “the illegals” without ever answering the unanswerable question: What does an illegal immigrant look like?

Residents of Phoenix have been telling the world for years that the sheriff’s office equated looking Latino with being illegal. Local activists, journalists and a few brave elected officials and community leaders raised the alarm long ago about the sheriff’s “crime suppression” sweeps through Latino neighborhoods and communities, where his deputies indiscriminately stopped drivers and raided day-labor hiring sites.

The sheriff has so far survived criticism and federal investigations; notoriety has helped stoke his popularity.

I’d like to know whether George W. Bush, Mitt Romney, John McCain, Rick Perry, Kris Kobach and the other Republican politicians who have praised his name, shown up at his “Tent City” jail or fought over his endorsement will stand by him now. Or will they defend the rights of free citizens to walk the streets in peace without fear of harassment by armed government agents? It’s unlikely.

There is more to be done with Sheriff Arpaio, like getting rid of him. There is a recall petition in Maricopa; the deadline is May 30, and backers are praying that the ruling will lead to signatures.

Then there is the assigning of responsibility.

The sheriff’s office would like you to know that there is someone else to blame: “It’s obvious it received bad training from the federal government,” a Maricopa Sheriff’s Office lawyer, Tim Casey, told The Times on Friday.

Judge Snow acknowledged that claim in 2011, when he granted class-action status in the case to Latinos who had been stopped in Maricopa :
“Defendants assert that in training 287(g) officers, ICE informs them that race or apparent ancestry may be used as one factor in evaluating whether officers have reasonable suspicion to stop an individual, although it cannot be considered the sole factor.”

“Whether or not such information is provided by ICE to local law enforcement officers during their 287(g) training, the law in the Ninth Circuit is clear: `Hispanic appearance is of little or no use in determining which particular individuals among the vast Hispanic populace should be stopped by law enforcement officials on the lookout for illegal aliens.’”

Sheriff Arpaio is part of a bigger story. It is easy to lump him together with the other Arizona immigration extremists, like Gov. Jan Brewer, the disgraced former State Senator Russell Pearce, the Minutemen. It’s true that he is a product of Arizona’s hot-headed political culture. But he is also a creature of ICE and the Homeland Security Department, which has relied heavily on partnerships with deputized local law enforcement, despite warnings about Arpaio-style policing all over the country.

Friday’s ruling is an opportunity to step back and see where the enforcement overkill has gotten us. Arizona’s immigration law, SB1070, has been battered in federal court, but is still on the books. States such as Alabama continue to follow Arizona’s example with their own radical laws. Federal judges have moved to halt the worst excesses by state legislatures and lawmen, but only after much needless suffering and unconstitutional abuses. The tide may have turned in the struggle against racial profiling in Maricopa County, but the larger problem —  local law enforcement and the federal government together spreading an ever-wider immigration dragnet — is still with us.